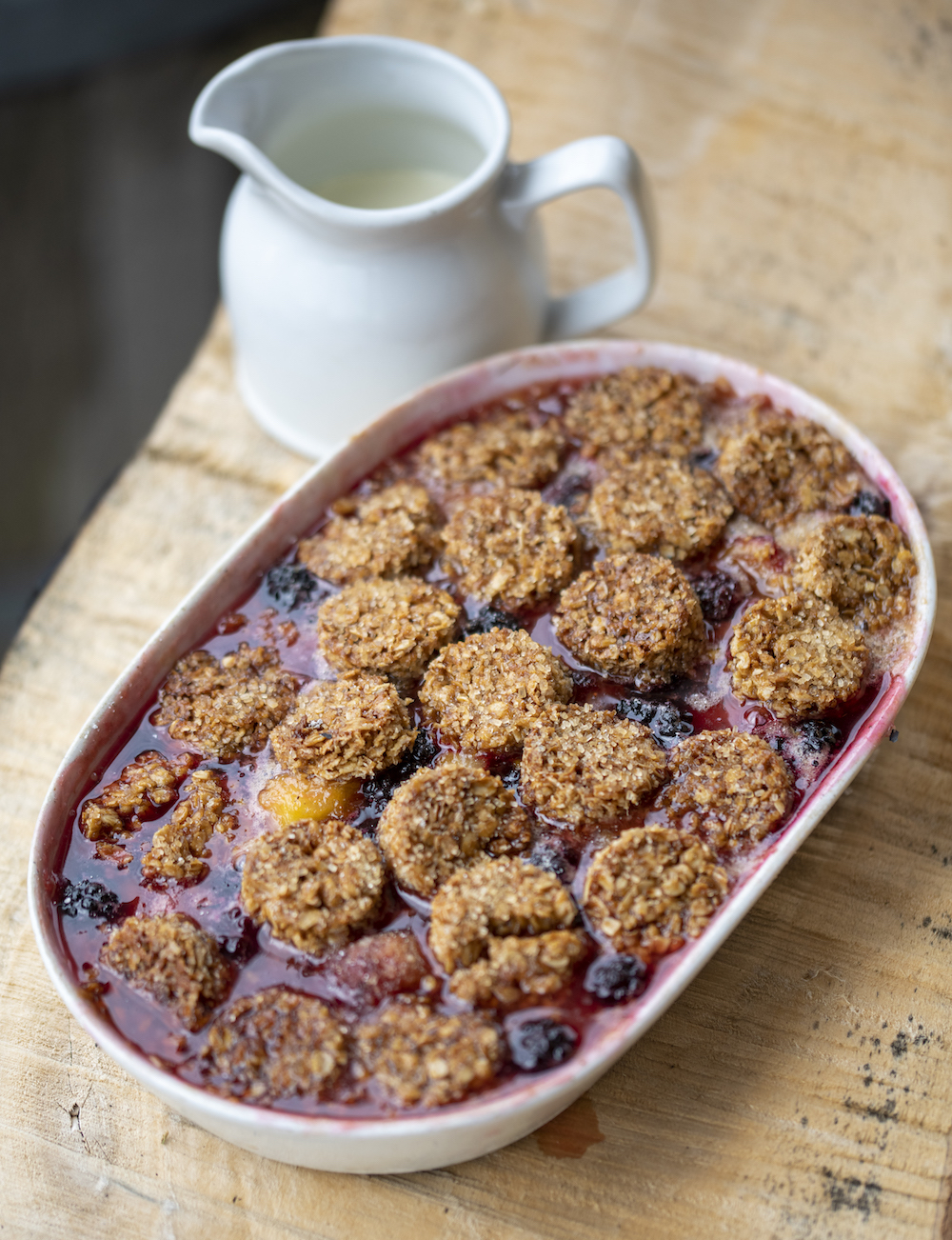 A “Cobbler” is something between a pie and a crumble – seasonal stewed fruits with a crunchy, sugary crust arranged like “cobbles” in an ancient street. In the Gladwin Family way, we make ours with some delicious juicy conference pears, wild blackberries and flapjack cobbles. We then add a melted brulée style topping of demerara sugar for extra crunch. Although there are two stages to this recipe it is well worth the effort, plus you will get a feast of flapjack offcuts to snack on as a byproduct.

Put the pear and blackberries into a heavy bottomed pan over a gentle heat. Stir in the honey, lemon juice and spices.
Simmer for a 3-5 minutes until the fruit is soft and has made its own juice. Set aside to cool.

Put the porridge oats, butter, sugar and golden syrup into a heavy based pan over a moderate heat. Stir together with a wooden spoon until the sugar has all melted.
Turn the mixture into the baking tin and spread out with a palette knife to form an even layer. Bake in a preheated oven at 160°C until golden brown.Allow to cool a little, then using a 3cm cutter, cut small round cobbles.

Put the fruit mix together with all its juice into an ovenproof dish. Place the flapjack cobbles evenly on top, then sprinkle with demerara sugar. Before serving, bake the cobbler in a moderate oven 180°C for 15 minutes.

Serve with lashings of custard or vanilla ice-cream. Delish!

Come and give the Local & Wild Thanksgiving menu a try, available on the 24th November for lunch and dinner service, as highlighted in The Handbook.

The latest Gladwin Family recipe for Braised Venison with Grapes, Chestnuts and Red Wine. This is a lovely wholesome casserole to celebrate the end of the grape harvest.

A snack we can't wait for you to try has come onto the menu. Click here to read more about it.

As the bank holiday for the Queen's funeral has now been approved for Monday the 19th September, we wanted to make everyone aware that both The Shed and Rabbit will be opening for lunch, to celebrate such a wonderful life.